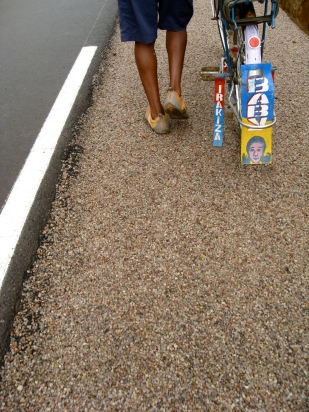 Walking a bicycle taxi up the newly paved road

I’ve been trying diligently to imagine Nyamata as it must have been in the peri-genocidal period, and it’s an interesting thought.  I keep coming back to Hatzfeld’s research, and one of the genocidaires’ statement that the looting that was so common during the genocide allowed the impoverished farmers to go into shops in Nyamata “where farmers had never been before.”  I also keep thinking of the night when the 6 mzungus apparently bought all of the beer in Mbyo.  If the economic situation along the Kigali-Bugesera-Burundi road has picked up since it was paved last year, its baseline must have been awfully low, which offers further commentary on the poverty of the farmer-genocidaires.

Improved transportation infrastructure is obviously going to be more beneficial to people who already have the wherewithall to use it – the wealthier shopkeepers in Nyamata, I’m guessing.  The picture of pre-genocide Bugesera that Hatzfeld develops seems predicated on local production to a much greater degree than it is today, where you can find Primus & packaged foods way the hell off the main road, like in Ngeruka.  (I’m pretty sure Ngeruka is still waiting for the water pipeline to come its way.)  So transport of heavy & imported items, like bottled beer and maize flour, would be privileged.   It extends the reach of existing markets.

I suppose what I’m wondering about is its effect on the incomes of people inside and outside of Nyamata, then.  It seems reasonable that their incomes must have gone up to some degree in order to be able to afford such things; was this because of trade with Kigali, or because new markets developed with truckers and construction workers passing through town?  I’d also love to know how this affected the market access of rural Bugesera residents.  The weekly market at Nyamata strikes me as decently large; did a paved road make it easier for outlying farmers to come to town?  Or does pavement only really make a difference for people who can afford wheeled transport?  The rain here rarely makes roads totally unwalkable after it’s finished, so perhaps pavement would only be a marginal improvement for people who were just walking anyway.  Institutional memory in Rwanda seems remarkably short sometimes, in large part because of the enormous upheaval and movement in the several years following the genocide; I’m not sure that anyone in Nyamata, literally, has been there long enough to know.

One thought on “Transportation infrastructure”