The last time I was in Kinshasa, I bought a handful of old bills from a street vendor.  Evolving currency design turns out to be a pretty good indicator of the country’s political fortunes.  Start with these notes from the Belgian Congo in 1947:

It’s not exactly clear what’s going on in this image – I think the child is reaching down to a beehive – but of course both the figures appear to be white Europeans.

The bills from 1960 are notable for their lovely graphic design.  These are the only bills in my collection until the late 1990s that don’t feature a politician, depicting a young woman instead. 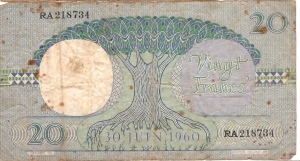 In 1967, the currency switched from the franc to the zaire, which was subdivided into makuta instead of centimes.  By the early 1970s, Patrice Lumumba graced the makuta note, while Mobutu showed up on the zaires.  I didn’t recognize him at first without his later-habitual leopard print hat and abacost.  (Thanks to commenter Eloko ya Masaki for identifying him!)

By the mid-1970s, Lumumba’s portrait had been replaced by that of Mobutu.  The Marshal stayed front and center on the currency for the next 20 years.  These 1977 zaires are hopeful about hydroelectricity. 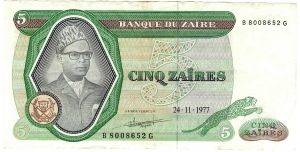 By 1991, high inflation rates had pushed the largest banknote up to 50,000 zaires (which were followed by the 5,000,000 zaire note the next year).  Perhaps no longer feeling so enthusiastic about industrialization, these notes focused on wildlife.

In 1993, the central bank redenominated the currency in a (doomed) attempt to rein in inflation.  The back of the note features the Palais de la Nation, where the president’s office is located today.  (Thanks again to Eloko ya Makasi for this information!)

After Mobutu’s fall, the currency switched back to the franc.  This 500 franc note from 2002 was worth about US$1 when I got it.   In a reflection of the country’s deindustrialization, it features artisanal miners panning for diamonds in a river.  The contrast between the promise of mineral wealth and the obvious poverty of the miners says a great deal about where the DRC is today.

5 thoughts on “The political evolution of Congolese currency”