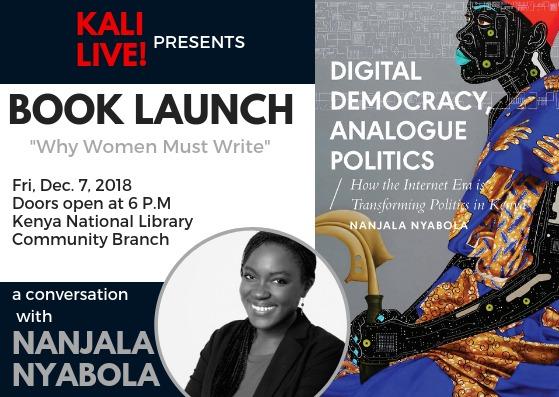 Last week I attended the Nairobi launch of Nanjala Nyabola‘s new book Digital Democracy, Analogue Politics.  It was one of the best public events I’ve attended since I moved to Kenya.  I could have sat there for hours listening to her discuss everything from the geography of Kenyan Twitter users to why refusing to wear heels in downtown Nairobi is a political act.   Lots of credit also to Christine Mungai, who was an excellent interviewer, and to Kali Media for organizing the event.

I arrived a bit late, and by the time I settled in the conversation had reached the topic of the political nature of archives.  One theme Nanjala kept returning to was the question of whose voices are represented in archives.  She noted that when she was doing research on the 2007 – 2008 post-electoral violence, the sources she found didn’t reflect her own memories of that period.  This is a salient example of the limited availability of Kenyan voices in archival records at all.  She found as well that many Kenyan newspapers don’t digitize their older articles, meaning that anything more than a few years old gets excluded from the digital record.

Nanjala also called attention to the physical location of African archives, many of which are held near the capitals of former colonial powers.  The archives of British East Africa, for example, are located in Oxford.  Given how difficult it is for foreign scholars to get UK visas, as well as the cost of travel, this means that large portions of African history are inaccessible to African academics.  She pointed out that many episodes of anti-colonial resistance like the 1929 Aba Women’s War in Nigeria went undiscussed by scholars until someone happened to stumble across them in the archive, raising the question of how many other key events in African history we might be missing.

All this discussion led to an eloquent summary of her desire to publish this book: “I write to hold space in the archive for people like me and the people I know.”  Writing is a way of creating an alternate archive, one which captures voices that might otherwise go unheard.  Nanjala had some excellent points about citational practices as a type of archiving, asking the reader to pay careful attention to “who’s doing the blurb on the back cover, who’s in the works cited, who’s in the theory section.”  (This point is also made very well by Cite Black Women.)  She also praised the work done by organizations like The Elephant, Bright Magazine, and Popula to provide space for longform writing from African authors, which is generally lacking on the continent.

I came away incredibly impressed by the clear amount of thought and research which had gone into this book.  I really can’t wait to read it!  Digital Democracy, Analogue Politics is available now at Prestige Bookshop in Nairobi or via Amazon.