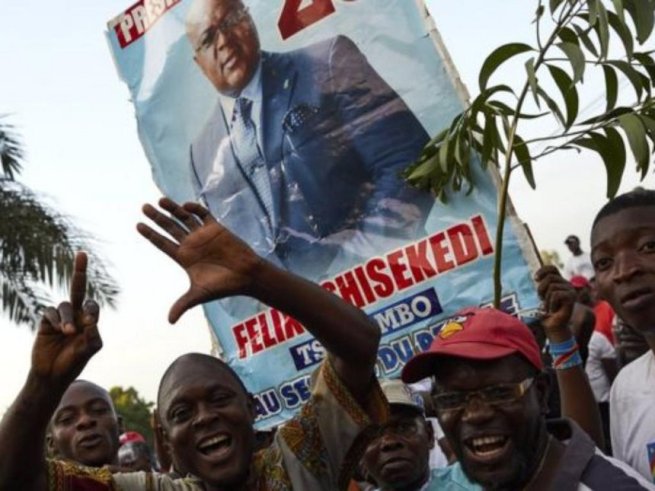 Supporters of Félix Tshisekedi at a rally outside his party headquarters. (Photo via The Star)

I’ve written an analysis of the recent Congolese elections for Democracy in Africa.  Beyond recounting the events of the election, I’ve tried to draw two broader lessons from it as well.  The first has to do with the changing nature of presidential authority in the DRC.

[The transfer of power] demonstrates that even a strong president can’t hold on to power indefinitely in the fact of increasing diplomatic and societal opposition.  Kabila has major advantages in the political game, including great personal wealth and command of the armed forces, who are regularly deployed domestically to harass protestors.  Yet he only managed to delay his departure from office by two years, and couldn’t compel a sufficient number of voters to accept his chosen replacement. He also agreed to a peaceful transfer of power to his successor.

This is quite different to the days of the dictator Mobutu, who held on to power in the DRC for more than thirty years in the face of continual protests and diplomatic isolation, and only left when he was overthrown by Laurent Kabila’s rebel group in 1997.

The fractious and personalized nature of Congolese electoral politics opens the door to unusual coalitions, such as that between Kabila and Tshisekedi.  The electoral system is structurally designed to produce weak parties oriented around a single politician. It’s easy to register political parties in the DRC, and the country’s virtually non-existent private sector makes the perks of elected office look unusually appealing.  The result is a proliferation of dozens of tiny parties contesting every election.

Once elected, politicians form an ever-shifting constellation of alliances as they seek to maximize their access to state resources.  Seeing candidates come to an agreement across the aisle is not nearly as unusual in the DRC as it is in parts of Europe or North America.

One thought on “An unexpected transfer of power in the DRC”