Cross-posted from my Africa Update newsletter.  We’ve got positive masculinity in Mali, the triple-taxed business owners of Somalia, a bridge on the River Congo, the perils of not participating in the census in Kenya, and more. 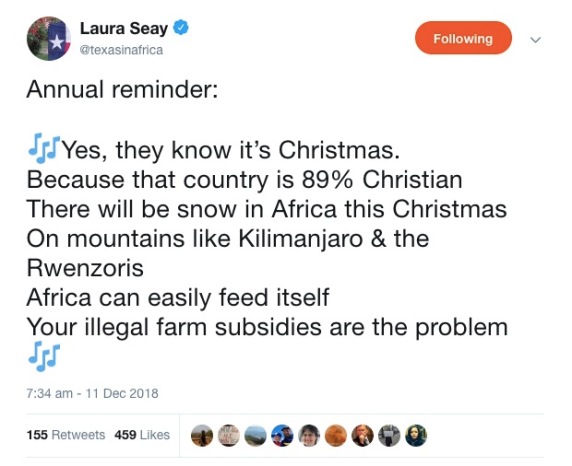 West Africa: An innovative community counseling project has reduced rates of intimate partner violence in some towns in Ghana.  Mali, Togo, and Benin are using men’s clubs to promote ideas about positive, non-violent masculinity.  Here are some lessons for scaling up cash transfer programs from Burkina Faso.  This was an insightful article about Nigeria’s worsening seasonal flooding problem.

Central Africa: In Uganda, LGBT+ people are finding that rural family members can be surprisingly accepting.  Uganda is also arming local defense groups in places with a limited police presence, leading to concerns that they’ll cause more problems than they’ll prevent.  This was a good summary of how Uganda’s Museveni has managed to hang on to power for 32 years.  The Burundian government is trying to kick UNCHR out of the country after two years of refusing to work with the human rights body.  As the DRC’s elections draw nearer, dissidents who say they were tortured by Kabila’s government are speaking out.  Displaced people in eastern Congo are flocking to wartime boomtowns.  In a historic first, Kinshasa and Brazzaville are going to be linked by an AfDB-financed bridge.

East Africa: Sudan’s parliament is considering legislation that would let President Bashir, who’s already been in office since 1989, stay past the current end of his term in 2020.  In Somalia, business owners complain that they’re paying triple taxesto al Shabaab, ISIS, and the government.  New research shows that cash transfers increase recipients’ trust in local government in Tanzania.  Check out this new edited volume on post-liberation Eritrea.  South Sudan is planning to relocate thousands of citizens away from newly operational oil fields.

Graph of visa openness from the AfDB, via Ken Opalo

Kenya focus: In an interesting twist on the standard narrative of multinational corporations grabbing land in Africa, Kenyan governors are trying to reclaim land from large companies as their leases expire, claiming that the British colonists didn’t have the right to sell the land in the first place.  The Africa Prisons Project helped one Kenyan inmate teach himself law behind bars and get his case overturned.  Here’s the background on the politics of welfare expansion in Kenya.  This is a remarkable piece of writing tracing the decline of one Kenyan family’s fortunes under the Moi government through the quality of their daily tea.  Kenyans who don’t want to talk to census-takers next year might face enormous fines.

Southern Africa: Malawi is considering an onerous bill for the registration of NGOs, with penalties including years in jail or fines of $20,000 for those who don’t comply.  Congrats to Shamila Batohi, who just became the first woman to serve as South Africa’s chief prosecutor.  Zambian firms are willing to pay more taxes if they actually see improvements in public services afterwards.  In Zimbabwe, urban authorities are promoting cremation as room in cemeteries runs low, but many people are concerned that their dead ancestors will be angered if they’re not buried properly.

All about museums: Belgium just re-opened its African museum, newly revamped to be less racist, but the DRC is now calling for it to return artifacts for a proposed future museum in Lubumbashi.  When Western museums try to keep African artifacts with claims that they’ll be better protected, “who are they guarding the artifacts from?”  I can’t wait to visit the Museum of African Civilizations in Dakar.

Public health:   In Zambia, transgender and intersex people are falsifying prescriptions for hormones and self-administering them when the formal healthcare system proves too difficult to navigate.  Community health workers in Uganda are more effective when they can cover their costs by selling basic medications on their home visits.  Access to toilets is improving in poor neighborhoods in Nairobi, but many women still don’t use them out of concerns over cost and security.  In Burkina Faso, a non-profit is helping sex workers avoid HIV by bringing confidential testing services right to the streets where they work.   Africa is the fastest-growing region for contraceptive use, likely because its baseline rates of usage remain quite low at only around 25% of sexually active women.  Rates of female genital cutting have dropped significantly in East Africa over the last two decades.

My writing: I’ve been doing more writing lately.  Check out some reflections on the politics of African archives, the economics of political transitions in autocracies, and why Nairobi banned the mini-buses which are its most popular form of transport.

Looking forward to reading this book, via a suggestion from Robtel Neajai Pailey

Podcasts: Check out the Nairobi Ideas podcast, produced by my great team at Mawazo!  CSIS has a new “Into Africa” podcast which looks promising.  “I Have No Idea What I’m Doing” is a new podcast for East African women in business from Kali Media.

A link roundup cross-posted as usual from my latest edition of Africa Update.  We’ve got Nigeria’s undercover atheists, the electricity pirates of the DRC, Kenya’s top Somali restaurants, the best Rwandan hairstyles, and more.

West Africa: In Benin, the government has just raised the fee required to register as a presidential candidate from US $26,000 to US$450,000.  A new wave of travel start-ups is encouraging Nigerians to explore their own country rather than traveling abroad.  Nigeria’s undercover atheists are ostracized for their lack of faith.  Read this special issue of Kujenga Amani about peacebuilding in the Niger Delta.  Ghanaian market vendors fought back after they were targeted for eviction, and ended up getting a new market building so they could keep selling.  Sierra Leone recently implemented a popular new policy of free primary education, but they’re falling short of school seats and teachers.  This is a remarkable thread about how the BBC identified soldiers responsible for killing civilians in a video from Cameroon.  D’Ebola à Zika, un labo tout-terrain en Afrique de l’Ouest. 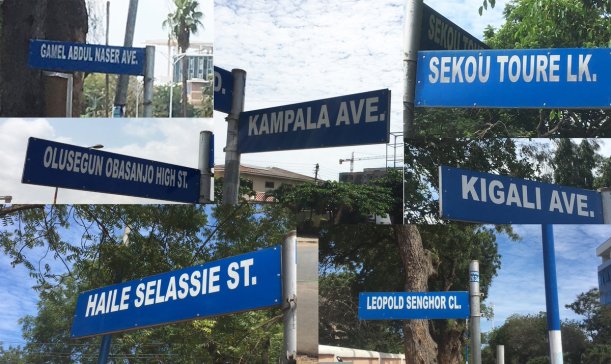 As Charles Onyango-Obbo notes about Accra, “All African capitals, and its independence & post-independence leaders who were minimally anti-imperialist have streets named in their honour. They’ve probably done so in Accra alone more than all the rest of Africa combined!”

Central Africa: Russia has begun supplying arms to and signing opaque cooperation agreements with the Central African Republic.  IPIS has released a new interactive map of armed groups in the CAR.  In the DRC, fees of US$500 for power meters and yearslong waits to have them installed have led many people to pirate electricity from their neighbors.  Burundi has begun suspending NGOs for failing to comply with opaque legal regulations.  La Belgique va rendre au Rwanda les archives de la période coloniale.  Uganda’s former police chief was recently arrested, and there are rumors it was because he might have been fomenting a Rwandan-backed uprising against Museveni.

Some fantastic Rwandan hairstyles from the early 20th century, via James Hall

East Africa:  This article on Kenya’s Somali cuisine made me hungry!  I’ll have to add those restaurants to my list for my next staycation in Nairobi.  Read this piece on the history of Islam on the Kenyan coast.  Kenya may reconsider its criminalization of homosexuality in light of India’s recent decriminalization of the same.  The IGC has a new report contrasting patterns of statebuilding in Somalia and Somaliland.  This was an insightful description of how Tanzania’s Magufuli consolidated power within the CCM.  Magufuli has also called for a ban on contraception, saying that Tanzania’s population is too small.  A new report estimates that more than 380,000 people have died in South Sudan’s civil war.

Southern Africa: Members of the ANC in South Africa are brutally assassinating each other in an intra-party struggle for control.  South Africa recently legalized personal use of marijuana, but more needs to be done to ensure that the poor rural farmers who grow it also benefit.  The new On Africa podcast is kicking off with an analysis of Zimbabwe’s recent election.  Meet the woman challenging sexist laws about the inheritance of chieftaincy in Lesotho. 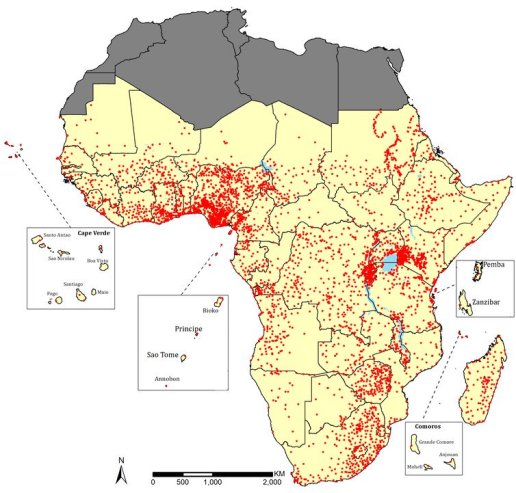 Here’s where every hospital in Africa is located, via Makhtar Diop

Health: Congratulations to Dr Denis Mukwege, who has won the Nobel Peace Prize for his work providing healthcare to women affected by sexual violence in eastern DRC.  The Ugandan government has banned all ministers from seeking healthcare abroad.  In Kenya, an estimated seven women die each day from unsafe abortions.  This was a heartbreaking portrait of South Sudan’s best maternity hospital.  Harsh laws against adultery prevent many women in Mauritania from reporting sexual assault. 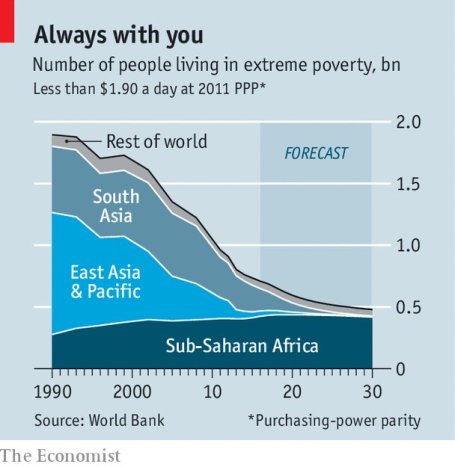 Chart of the day via Justin Sandefur

Academia: Scholars based in Africa are encouraged to submit their papers to the Working Group on African Political Economy by October 21, and to this conference on Gendered Institutions and Women’s Political Participation in Africa by October 15.   Join this free online discussion of state-building in Tanzania with the African Politics Conference Group on October 15.  Don’t miss this essential reading list on African feminism or this new edition of Ufahamu Journal on the African university.  Let’s hold more conferences on Africa in Africa, so that African researchers don’t run into visa problems.

Additional chart of the day, showing that concerns about Chinese debt in Africa are rather overblown, via Quartz

Fellowships: The Institute for Qualitative and Multi-Method Research at Syracuse has five fully-funded scholarships for African scholars to attend.  The Iso Lomso Fellowship for Early Career African Scholars is open until October 20.  Several scholarships are available for African PhD students and researchers through the Next Generation Social Science Fellowship.